Two years of Tokayev’s presidency: reform program in the context of the fight against the pandemic


June 9 marks two years since Kassym-Jomart Tokayev became President of Kazakhstan following the 2019 presidential elections. The past twelve months have undoubtedly been overshadowed by the global health crisis caused by the COVID-19 pandemic. Nevertheless, important political reforms were implemented in Kazakhstan during this period which transformed the country and contributed to its ongoing democratization.

The inauguration of Kazakh President Kassym-Jomart Tokayev took place on June 12, 2019 at the Independence Palace in the capital. Tokayev was sworn in to the people of the country and officially took office as president. Photo credit: Akorda.

In 2019, no one could have predicted that last year all world leaders would be focused on tackling a raging global pandemic and its terrible impact on the economy and society. Kazakhstan, like other countries, had to endure major difficulties in 2020 and the first half of 2021. To stop the spread of the virus, President Tokayev established a state of emergency in Kazakhstan in March of last year , which included strict quarantine measures. Naturally, while limiting the spread of the virus, this has had a negative impact on businesses and the economy. To support the population during this period, according to government data, more than 4.5 million people received financial benefits and more than 700,000 businesses and entrepreneurs were supported through tax exemptions. About 2 million people benefited from a loan deferral. These measures have made it possible to support the most disadvantaged as well as small and medium-sized private enterprises. 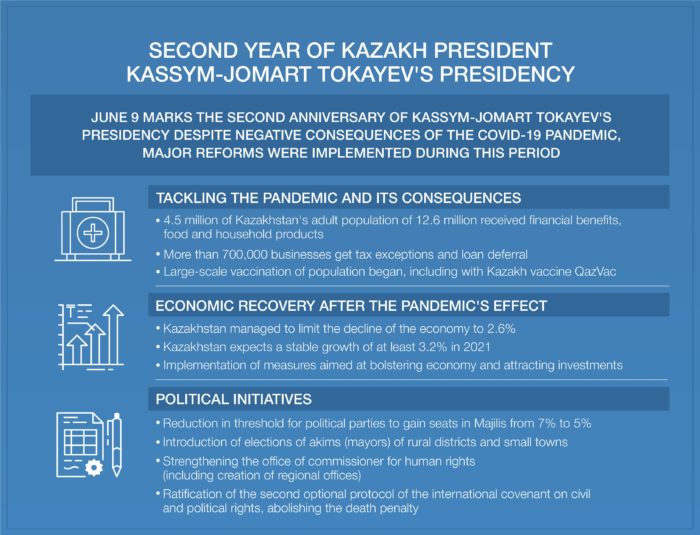 Despite the challenges posed by the COVID-19 pandemic, Kazakhstan has managed to limit the decline in its economy to 2.6%. While this is a substantial drop from 4% growth in 2019, it is not as severe as in other countries. For example, the UK economy shrank by almost 10% in 2020, the US economy by 3.5%, while overall economic activity in advanced economies fell by around 7% last year. Thanks to the measures implemented by the Kazakh government, the country expects decent GDP growth of at least 3.2% in 2021.

The tax reforms that have been introduced over the past year have helped to strengthen the foundations of the Kazakh economy. For example, measures have been implemented to improve taxation and land use. A moratorium on the creation of new public enterprises and parapublic sector entities has been imposed, micro and small enterprises have been exempt from taxes and a 3-year ban on their inspections by authorized public bodies has been introduced. The fulfillment of tax obligations has been simplified, in particular thanks to digitization. To further strengthen the private sector, the Agency for the Protection and Development of Competition was created, while the Financial Supervisory Agency was created to combat the underground economy, with the aim of reducing its level to 15% by 2025. 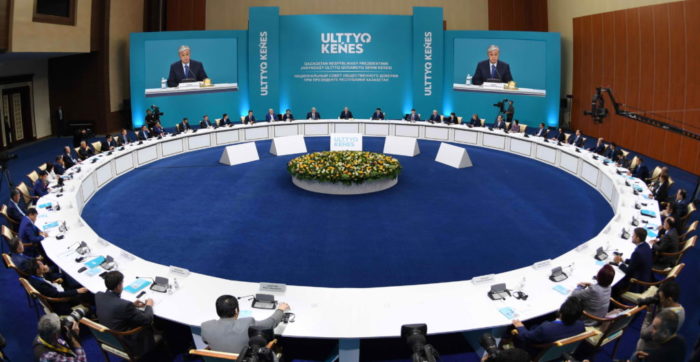 Over the past twelve months, President Tokayev has also made it a priority to reform the system of attracting and supporting investments. In this regard, a Task Force team has been established to provide end-to-end support to investors. These and other economic initiatives have helped keep Kazakhstan’s economy afloat during a hectic 2020 and are expected to contribute to a faster growth rate in the future.

The fact that Kazakhstan has managed to keep its economy relatively resilient and resistant to external threats means that the country has been able to introduce and implement a long list of political reforms – arguably the flagship of the second year. of Tokayev’s presidency. For example, a new law on rallies has made it easier to organize and participate in rallies. A 30 percent quota for women and youth representatives on electoral party lists has been put in place to expand political participation. Defamation has been decriminalized and the second optional protocol of the International Covenant on Civil and Political Rights, abolishing the death penalty, has been ratified. In order to promote parliamentarism and encourage political pluralism, the number of members required for the establishment of political parties has been reduced by half, and the threshold for political parties to obtain seats in the lower house of parliament has recently been lowered. from 7 to 5%. . Elections of rural mayors have also been introduced. As President Tokayev noted, these reforms aim to promote the protection of human rights, as well as political plurality and competition in Kazakhstan. The journey towards further democratization began after the 2019 presidential election, and its pace picked up in the second year of Tokayev’s presidency.

Going forward, the priority of the government of Kazakhstan will be to prevent a further increase in COVID-19 infections and to ensure economic growth and a further increase in the standard of living of its citizens. To achieve this, a large-scale vaccination of the population was launched throughout the country, mainly with the Russian-made vaccine “Sputnik V” and the Kazakh vaccine “QazVac”, which was registered by the World Health Organization. health as a candidate vaccine. in May of last year. Sinopharm’s Hayat-Vax and CoronaVac products, produced in the United Arab Emirates and developed by Chinese companies, recently joined the pool.

Hopefully, the gradual decline in the COVID-19 infection rate and an imminent return to normalcy will allow Kazakhstan to focus more on implementing political and economic reforms, which will continue to transform the country for the better.