Parade of Animals at the Royal Academy

There are 1,465 works in this year’s Royal Academy summer exhibition, a third of them in the two galleries curated by Grayson Perry, who says his approach is ‘democratic’. So there are plenty of options to make a selection of, say, six. Should I go for the most impressive works, regardless of price or availability (e.g. Work 1 Christina Iglesias, 72 Rose Wiley, 352 Kathleen Ryan, 426 Mali Morris, 1305 John Gerrard, 1385 El Anatsui), or favorites personal (eg 163 Rachel Champion, 217 Jane Harris, 686 Moseley & Shuster, 850 Jock McFadyen, 862 Markus Vater) or particularly good value for money (eg 1412 Elpida Hadzi-Vasileva, 59 Stuart Amphlett, 803 Jayne Banovic, 239 Marion Piper, or editions such as 820 Fiona Banner, 1034 Carol Robertson) or works from the better preserved rooms (i.e. those jointly run by Rana Begum and Niall McLaughlin)?

Anything is possible, but the focus is on the natural world, in keeping with the climate theme chosen by exhibit coordinator Alison Wilding. The Charles Wollaston Prize of £25,000 for the work .word in disguise was won by Uta Kögelsberger for her video installation GATHER, which follows the mammoth task of the cleanup process after the devastating impact of wildfires in 2020. Bill Woodrow’s opening room consists largely of trees. Conrad Shawcross chose a whole wall of clouds. When it comes to animals, I see my main image as a charming take on what things could be without people – not so bad, maybe. And here are my choices of narrower animal works covering six classes: four from the Chordata phylum of vertebrates (mammal, bird, fish, and amphibian), two from Arthropoda (a crustacean and an insect). I could have added Michael Armitage’s snakes to cover the reptile class, but artists rarely deal with the other five phyla, for example I didn’t spot flatworms (Platyhelminthes) or springtails (Entognatha). 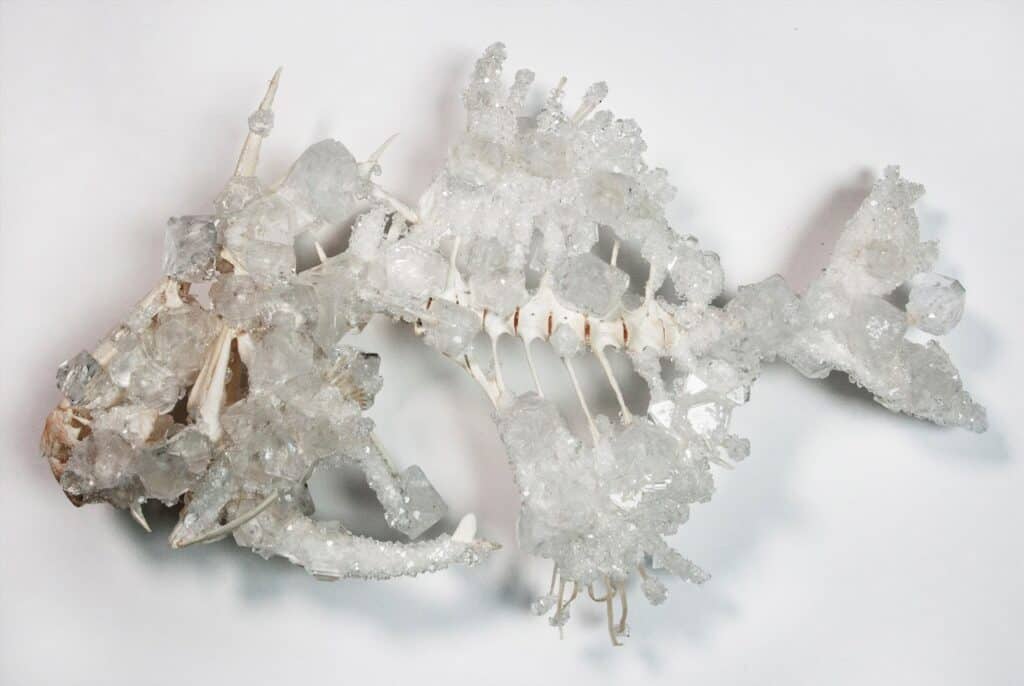 The biological term “vagabond species” describes a species pushed out of its normal range by climate change. The skeleton is that of a gray triggerfish, normally seen in the Mediterranean but increasingly present in UK waters and also subject to increasing chemical change due to ocean acidification, alongside a visually striking crystallisation process here. 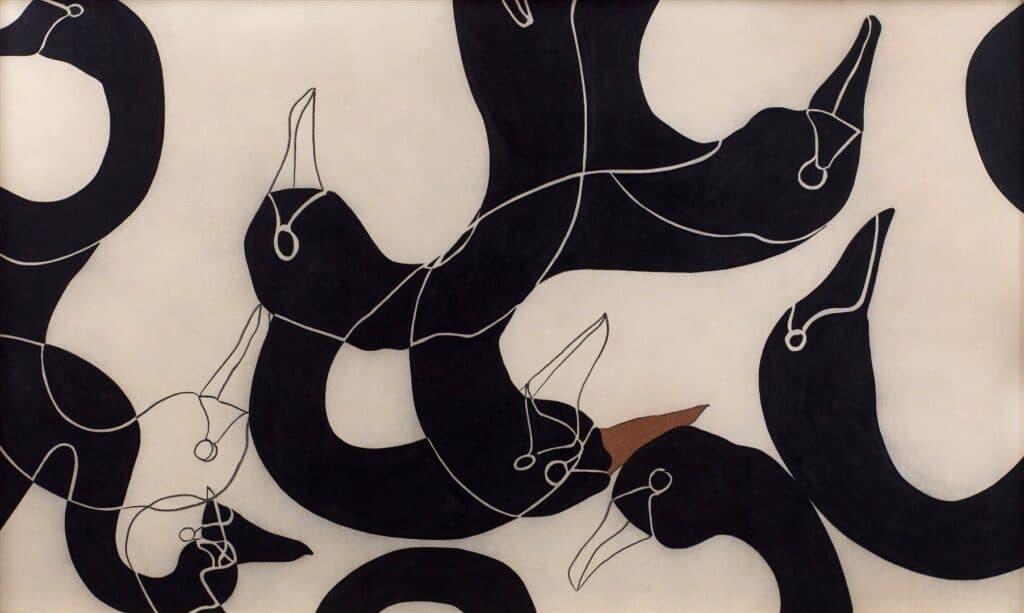 Swans is part of a series of large paintings that were recently arranged in a continuous line at Art Basel. Even on a single canvas, the necks of the strip bend and intersect to transform negative space into geometries with a hint of Escher. Hume uses charcoal on canvas, as he has done extensively over the past year, to painterly effect to move the simplified birds between figuration and abstraction, with the deft added touch of a colored beak in brown. 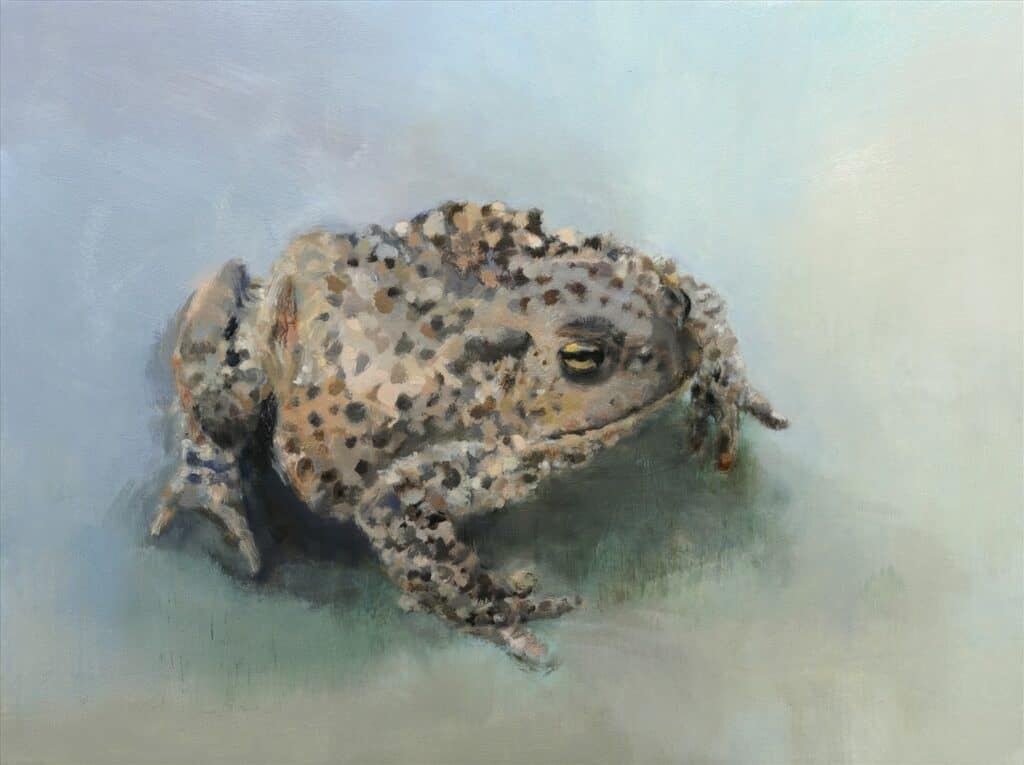 Reasonably traditional depictions of animals still abound in the Summer Show. Kent-based Anna Dickerson, London Zoo’s first artist-in-residence in 2009-2010, specializes in animal and bird subjects. This characterful and vaguely precise anuran comes with a teasing title: Is it painted by someone acting to conserve toads, or is the toad itself a conservator, perhaps one of the last individuals capable of reproducing? 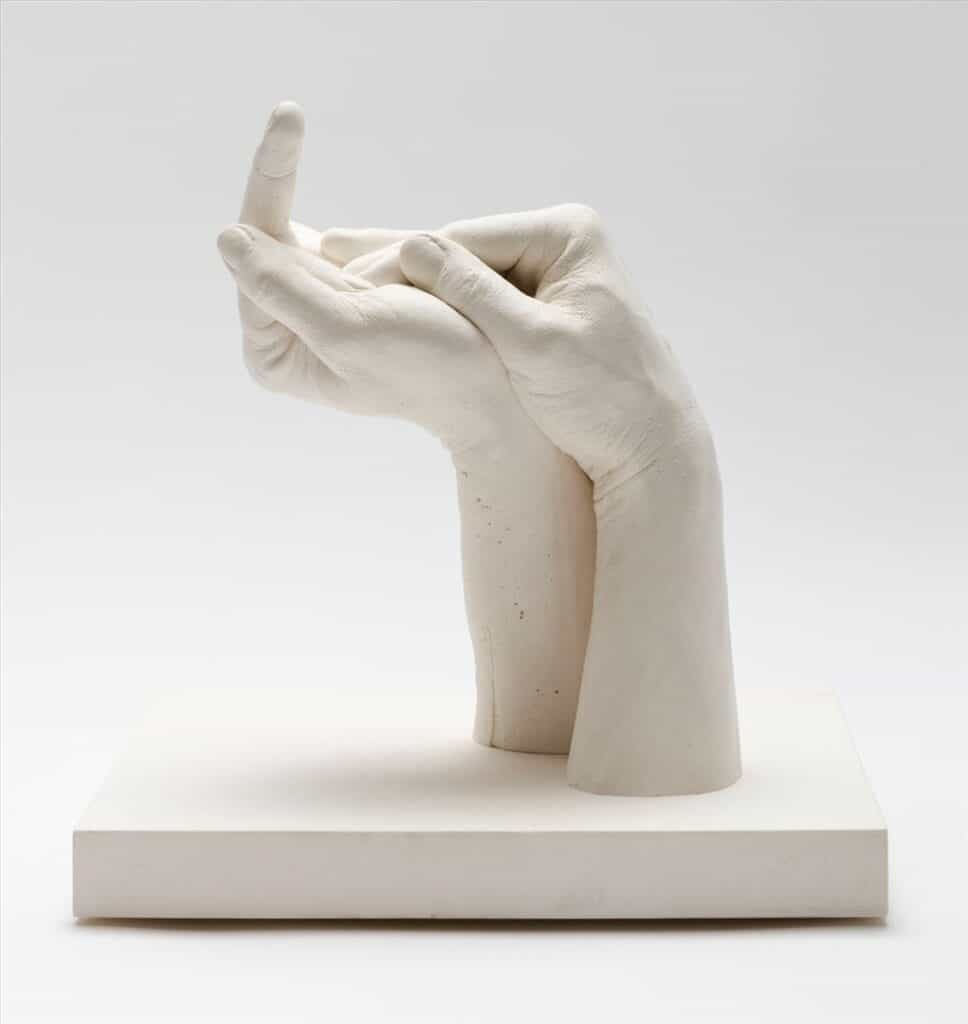 What, if any, is the distinction between the human and the natural? This question lurks behind many works, including the series of plaster casts of the artist’s hands of Marcus Coates performing the actions to cast the shadows of different species – two mammals for the price of one. The black rhino is, of course, threatened with imminent distinction at the hands of man, too likely to fade into the shadows for good. 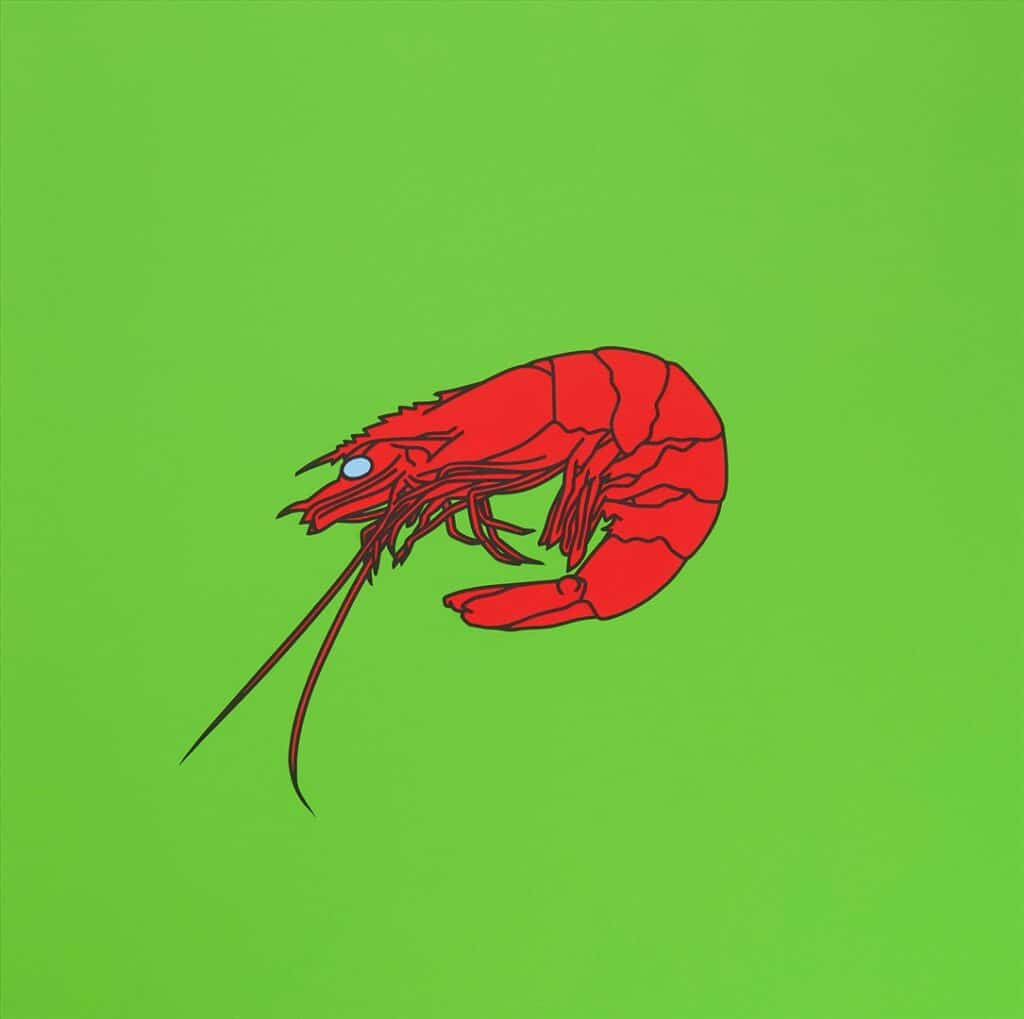 Michael Craig-Martin developed his distinctive visual language by depicting everyday objects, saying he “came to feel that the objects around us, especially those we valued least because they were the most ubiquitous , were actually the most interesting”. In recent years, he has extended the approach: one could say here that he is moving from a human design to a divine or evolutionary design. Either way, the intensity of color on a massive scale gives the humble shrimp an unexpected presence. 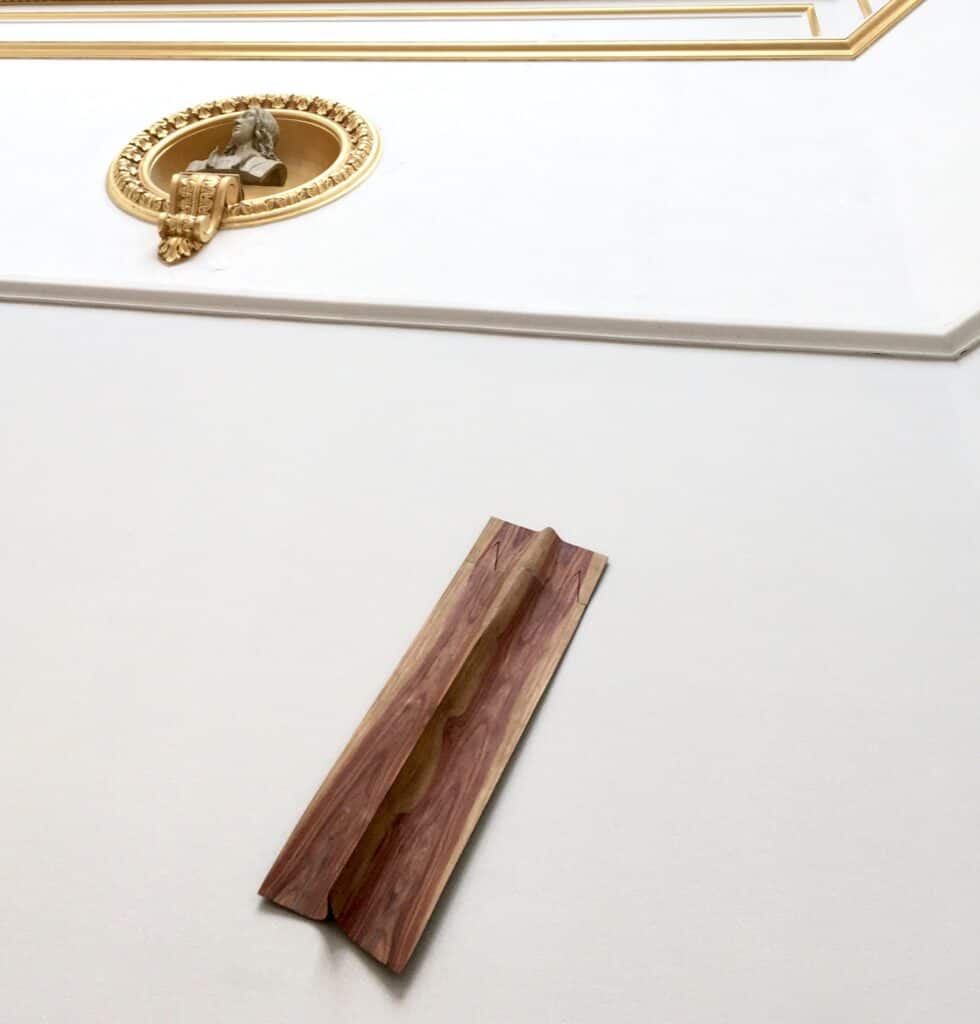 Make no mistake: I believe that this work claiming to pay attention to the innate qualities of its materials is actually a moth, preparing to camouflage itself in a well-plated room. Richardson distinguishes between “true ghosts” and “actual ghosts” – original creations that do not exist as opposed to echoes of existing originals – but this butterfly seems well equipped to jump between the two categories. .

Art writer and curator Paul Carey-Kent sees a lot of exhibits: we asked him to write down everything that comes to mind

Art critic and curator, based near Southampton. I write most regularly for Art Monthly, Frieze, World of Interiors, Seisma, Border Crossings, Artlyst, … and, of course, FAD.