MUMBAI – JSW Steel and Tata Steel plan to spend around 850 billion rupees ($ 11.4 billion) on projects over the next few years, expecting global demand to pick up as the pandemic recedes.

India appears to be emerging from a second wave of infections that has claimed thousands of lives and hampered business activity. Despite the disaster, steelmakers across the country were bolstered by demand from the United States and Europe. It is also hoped that a government investment in infrastructure will revive the national steel market.

JSW Steel, India’s largest private steelmaker, plans to spend around Rs 251.15 billion over the next few years to expand capacity and modernize factories across the country.

“We are now entering the next phase of growth with the new Rs 251.15 billion investment plan,” Chairman and CEO Sajjan Jindal said at the end of June.

Jindal said the plan is to increase the crude steel capacity of Vijayanagar in south-central India by 7.5 million tonnes. JSW Steel also plans to “enhance and digitize our mining capabilities and infrastructure in Odisha” and to establish a state-of-the-art color coating facility in Jammu and Kashmir, Jindal said.

With the expansion, Jindal continued, JSW Steel’s combined output would increase to around 37.5 million tonnes by March 25. The company has spent 480 billion rupees over the past three years to increase capacity by 50%.

Although major stimulus packages around the world have revived steel production and consumption, much of the recovery has been one-sided as China in 2020 accounted for 56% of global production / consumption. But other economies are now waking up and Indian companies intend to be aggressive in capturing the resulting demand.

Big stimulus packages from governments around the world are increasing global steel production and consumption. © Reuters

On Tuesday, Tata Steel announced that it would spend between 500 and 600 billion rupees over the next five years, for an average of 100 to 120 billion rupees. His capital spending in the fiscal year through March 2020 fell 55% as he tried to conserve cash amid the pandemic, he said.

“Strengthening the balance sheet remains the corporate strategy of the company,” said Koushik Chatterjee, Executive Director and CFO of Tata Steel Group. Despite the COVID crisis in India, “we are focused on completing the cold rolling mill complex and pellet plant in Kalinganagar within the next 12 months.”

Chatterjee said that as the company implements its spending plans, “we aim to strike an optimal balance between capital spending and debt repayment.”

According to Union budget documents released in February, the government-run Steel Authority of India raised its capital expenditure target for the current fiscal year to Rs 80 billion, from a previous target of about 40 billion rupees.

Business spending plans are increasing thanks to deferral of capital spending from previous years and production-related government incentives for companies improving domestic manufacturing and reducing dependence on imports.

The Financial Express reported that the Indian firm is considering 63.22 billion rupees for incentives to the steel industry.

This could further lift an industry that is already rebounding. Over the past year, steel producers have started to use more of their capacity as exports registered monthly gains and despite domestic demand remaining below pre-COVID levels.

“We expect that increased infrastructure spending, growing automotive and construction demand, as well as a pickup in private investment and consumer demand will continue to boost steel consumption,” he said. said Jindal of JSW Steel.

“Platts’ Metals Trade Review showed that so far in 2021, India had largely shifted its’ trade offer ‘target to Europe. HRC Northern Europe [hot-rolled coil] prices were about $ 65 / tonne higher than HRC Indian domestic prices in early January, ”S&P Global said in a note. “As of April 12, they were 300 USD / tonne higher. India has already exceeded its EU quota of around 40,000 tonnes this year, but hopes the steel will be cleared soon given the shortage of coils in Europe. “ 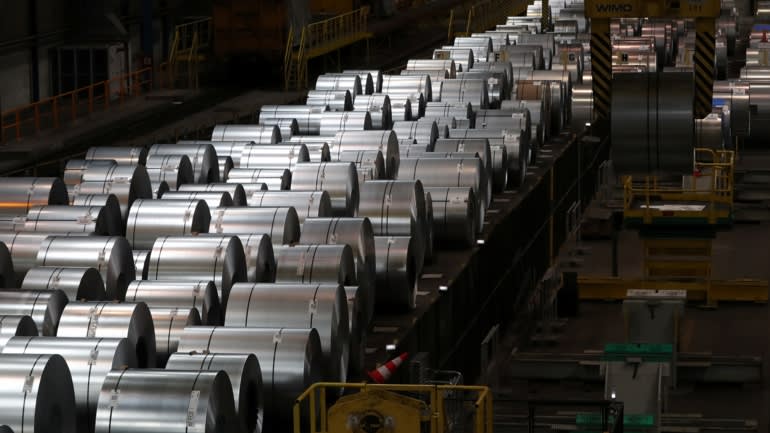 Metal coils at the Tata steelworks in Ijmuiden, The Netherlands. India hopes to export more steel to Europe, where there is a shortage of coils. © Reuters

Care Ratings, meanwhile, estimates that in the current fiscal year crude steel production will increase by 8% to 9% to 112-114 million tonnes, as demand is supported by an economic recovery, increased liquidity and public spending. In the Union budget for 2021-2022, the government increased its own capital spending allocations by 34.5% to 5.54 trillion rupees as it attempts to revive the economy, the government said. agency.

“Therefore, increased spending on key sectors like defense services, railways and roads, transport and highways would boost steel consumption which is expected to increase by 10-12% over the course of the year. 2022 to cross 100 million tonnes for the very first time. “Care Ratings said in a note in April.” An upward cycle in steel prices is expected to continue into fiscal 2022. “

Care Ratings also cited China’s absence from the global export market and rising demand for steel in China as major factors in increasing steel prices. “Ever higher demand from China thanks to the stimulus packages and the country’s desire to reduce production levels in 2021 to reduce CO2 levels will be an important factor that will boost steel prices,” said the The agency, adding that an imbalance in global demand-supply will provide Indian steelmakers with export opportunities.